C929 fuselage will be made in China 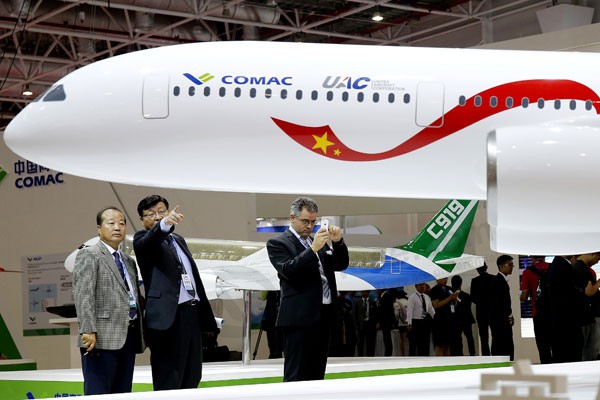 Russia to design wings; composite materials to make up bulk of aircraft

China will design and make the fuselage of the C929, while Russia will design the wings of the wide-body passenger aircraft, which is currently under development, said Commercial Aircraft Corp of China on Friday.

Better known as COMAC, the Chinese plane maker, which will build the new aircraft with Russia's United Aircraft Corp, disclosed several fresh details about the bilateral project at the Aviation Expo China 2017 in Beijing.

Although the main design center is in Russia, Shanghai will also have its own design office.

China and Russia will each take half of the work, and send design staff for exchange visits on a non-scheduled basis, according to COMAC.

Some 51 percent of the aircraft will be made of composite materials, which is expected to make the C929 economical and efficient.

"Its competing models include the A330 and the A350 of (European aircraft manufacturer) Airbus Group and the B787 of (US manufacturer) Boeing. Currently, we are selecting suppliers worldwide," he said.

"By the end of the year, we are likely to open tenders for the aero engine, and Rolls-Royce and General Electric are expected to join the bid. We are also trying to develop engines ourselves together with Russia."

Every three years, China and Russia will take turns to name the chairman of the joint venture, which was launched on May 22 in Shanghai.

Each country will hold four seats on the eight-member board of the company.

The C929 is a project that aims to break the duopoly of Boeing and Airbus in the wide-body passenger aircraft market.

"The aviation industry is a sector with marginal profits. China spends a lot of money buying wide-body aircraft from Boeing and Airbus every year," Lin said.

"If the country has its own products, it will help significantly reduce the cost of aircraft purchases, and airlines will be able to raise their profitability and offer cheaper tickets to customers."