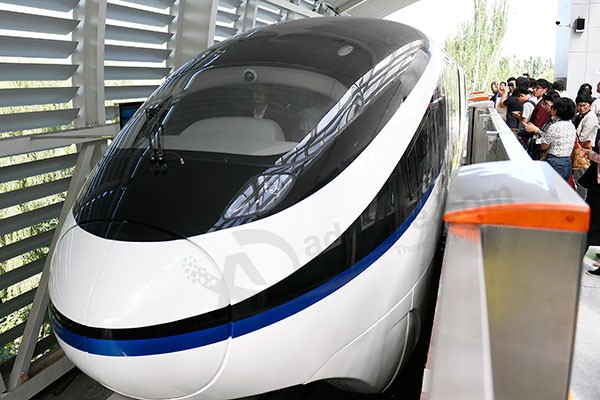 Its SkyRail is also China's first straddle-type monorail system. BYD has intellectual property rights to its design and other aspects.

The SkyRail system has seven rakes that will ply on the 5.67-km, eight-station route.

Yinchuan plans to build a monorail network spanning 300 km in all in the future.

SkyRail's seven trains have three cars each. Each car can carry around 170 passengers at a speed of up to 80 kilometers per hour.

SkyRail construction started in April and was completed in only about four months at a total cost of about 600 million yuan ($91 million).

The carmaker has spent about five years and 5 billion yuan to develop the new system.

It tried out the first monorail system in October at its headquarters in Shenzhen. It plans to begin construction of more SkyRail lines in 20 cities across China next year.

Earlier this week, the company said it would build its first overseas monorail line in the city of Iloilo in the Philippines. That line is scheduled to begin operations in 2019.

Wang De'an, an analyst at Ping An Securities, said BYD will earn 5 to 6 billion yuan in monorail revenue this year and 30 billion yuan next year.

He said diversification into rail transport would open up new business opportunities for BYD and drive the company's development in the future.

According to the company's interim financial results, its net profit declined 23.8 percent year-on-year to 1.72 billion yuan in the first six months of this year.

Monorail is now among BYD's four key business sectors for the first time. Others are cars, mobile phone components and batteries.

Post-results, BYD's stock fell in both Shenzhen and Hong Kong. But after Friday's monorail launch, the shares appeared set to reverse the downtrend, closing a tad up in Hong Kong.