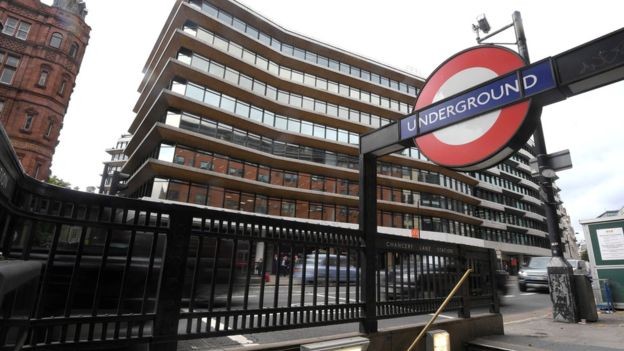 The PR firm has seen a loss of clients since being expelled from the industry trade body for a campaign stirring racial divisions in South Africa.

On Tuesday a major Bell Pottinger investor walked away from the firm and scrapped a plan to sell its 27% stake.

Chime, which counts WPP as a big investor, wrote off the stake's value.

HSBC said it had used Bell Pottinger for specific projects but would no longer do so.

Clydesdale Bank, the construction company Carillion, and TalkTalk are among a string of big names reportedly to have cut ties with the PR firm.

The future of Bell Pottinger is in question after the scandal, with even its founder, Lord Tim Bell, saying its days a probably numbered.

The Financial Times has reported that Bell Pottinger has hired the accountancy firm BDO to advise on a potential sale.

The firm's work on the campaign for Oakbay Capital, a South African company owned by the wealthy Gupta family, was accused of inciting racial hatred.

Lord Bell, who founded Bell Pottinger in the 1990s, resigned last year, partly due to his unease with the company's deal with the Guptas.

When asked on BBC2's Newsnight if he thought the PR company would survive the scandal, he replied: "I think it is probably getting near the end."

Industry insiders say the outlook for the firm is cloudy.

"If you are employed to manage a reputation and your reputation is shot, then it is not a good day," said Mark Borkowski, founder of Borkowski PR.

Danny Rogers, editor of PR Week, said: "The Bell Pottinger name is now tarnished, almost to the point of destruction."

He said the company had many prominent clients and rival PR firms will see the scandal as an opportunity to win that business.

"White monopoly capital" is the perception that South Africa's whites remain in control of much of the economy 23 years after the end of apartheid.

Bell Pottinger did not coin the term, but it is accused of using in a cynical way to stir up racial tension and divert attention from allegations that the government was unduly influenced by the Gupta brothers.

And like all good disinformation campaigns, it has an element of truth in it. South Africa is still a deeply divided society, both in terms of income and race.

A large section of South Africa's black majority feel they are no better off economically than they were 23 years ago. Earlier this year, government data found that whites still earn five times more than blacks.

Most South Africans know there is an inequality problem combined with an underlying racial tension. But to have a foreign PR company use these problems to detract from serious political issues for its own financial benefit has stuck in many citizens' craws.

Bell Pottinger and its founder, Lord Bell, have a reputation in the PR industry for taking risks.

The firm represented the South African Olympic athlete Oscar Pistorious after he was charged with murder.

In the late 1990s the PR firm worked on a campaign to release the former Chilean dictator, General Pinochet, who had been arrested in London on a warrant from Spain requesting his extradition on murder charges.

Industry insiders said that the willingness to represent controversial individual reflected the views of Lord Bell.

"When he ran it, he had the view that everyone was entitled to PR a bit like being entitled to being represented by a law firm," said Jason Nisse, who runs his own PR firm Nisse.

"He managed to push the envelope of what is allowable in public relations, but he stayed inside the envelope."

Next Article:CVS sets up pop-up pharmacies for Harvey victims