How Macquarie bank left Thames Water with a £2bn debt 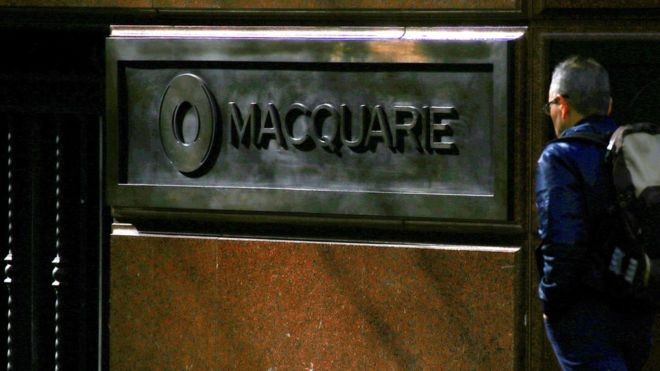 The £2bn was borrowed by Thames Water in 2007 and 2010 but used for the benefit of the bank and its investors, which owned and controlled the UK's biggest privatised water company.

This was in apparent contravention of conditions laid down by the regulator when Macquarie bought Thames in 2006.

Macquarie told the BBC its ownership had made Thames financially stronger.

The bank and its investors sold their last share of Thames Water in March this year.

In analysis undertaken for the BBC, Martin Blaiklock, a consultant with international experience of privatised utility funding, concluded that under Macquarie's control, the total returns made by the bank and its investors from Thames Water averaged between 15.5% and 19% a year.

Mr Blaiklock has 40 years of experience in such matters and said these returns were "twice what one would normally expect".

Macquarie disputed Mr Blaiklock's estimate of the total returns paid by Thames to Macquarie and its investors.

The bank referred the BBC to the 12.3% internal rate of return earned by its European Infrastructure Fund, of which their investment in Thames Water was a part.

Mr Blaiklock says that's not an appropriate measure of what Thames paid.

These disclosures follow scrutiny of the possible financial causes of Thames water's extensive pollution of the Thames, and other rivers, with untreated sewage between 2012 and 2014.

The company was under Macquarie's control at the time.

The Environment Agency prosecuted Thames Water over the pollution and, in March this year, the company was fined £20m - a record for such an offence.

Assessing incidents as being in the "reckless" or "borderline deliberate" category, Judge Sheridan concluded: "Knowledge of what was going on went very high indeed."

The transactions which culminated in Thames Water having the additional £2bn of debt on its books took place inside a network of companies set up by Macquarie at the time it bought Thames Water.

A consultation paper published in February 2007 by the water regulator Ofwat showed that Macquarie and its investors paid £5.1bn for Thames Water, of which £2.8bn was money Macquarie had borrowed to help fund the purchase.

It was written in reply to questions arising from Mr Blaiklock's attempts to understand Thames Water's offshore financial structure.

In this letter, Sir Peter reveals that, of the £2.8bn acquisition debt, no less than £2bn had subsequently been repaid. Not by Macquarie and its investors, who had originally borrowed the money, but from new borrowings raised by Thames Water through a Cayman Islands subsidiary.

Martin Blaiklock said: "That letter was a red flag to me because it showed clearly that the debt which Macquarie funds had used to buy Thames Water had been transferred over to Thames Water."

"So now, it was a responsibility of Thames Water and not of Macquarie," he added.

The transactions are particularly surprising because, in a February 2007 consultation, Ofwat disclosed that as part of Thames Water's licence to operate as a regulated business, it was to be treated as a "separate company" from Macquarie and the investors who owned it.

Referring specifically to the £2.8bn acquisition debt, Ofwat's consultation said: "This debt would be fully ring-fenced from Thames Water as the regulated entity".

But, as Sir Peter Mason's letter discloses, that is not what subsequently happened.

In reply to inquiries from the BBC, neither Ofwat nor Macquarie denied that the transactions transferring the £2bn debt from Macquarie and its investors to Thames had taken place.

Nor did they deny that it ran counter to conditions set out at the time Macquarie bought Thames Water.

Ofwat said: "Decisions about the overall capital structure of a company remain matters for the company itself, subject to oversight to prevent the transfer of undue risk to customers."

"The risks associated with the actual capital structure are borne by investors, not customers," the regulator added.

Macquarie said: "The consequences of a company failing to meet its commitments to the regulator are serious.

"Over the life of our investment," the bank added, "we reduced the risks and the cost of financing, while maintaining a strong investment grade credit rating."

While leaks occurred at only six of more than 350 plants that Thames Water runs, and environmental performance as measured by the Environment Agency had improved significantly in the last five years, Macquarie said: "Thames Water delivered £12bn of capital investment during our ownership and investment levels per customer were the highest in England and Wales."

Since selling its final share of Thames Water in March this year, Macquarie and its investors are out of the picture, taking the benefit of the £2bn debt repayment with them.

Both Ofwat and UK politicians have the power to scrutinise these transactions further.

But, for Thames Water and the 15 million customers it serves, forced to pay the bills the regulator sets for them, it looks like a case of water under the bridge.