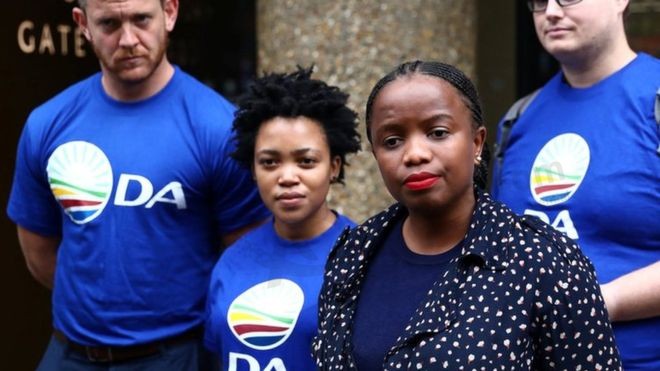 The chief executive of one of the UK's best known public relations firms has stood down amid claims it stirred up racial tensions in South Africa.

James Henderson, boss of Bell Pottinger, resigned weeks after the firm was found by a UK body to be in breach of an industry code of conduct.

Mr Henderson said that while he was not involved, he must take responsibility.

South Africa's Democratic Alliance party accused Bell Pottinger of a "hateful and divisive campaign to divide South Africa along the lines of race".

It said the PR firm emphasised the power of white-owned businesses in the campaign, which used the #WhiteMonopolyCapital hashtag.

In July, Mr Henderson issued an "unequivocal" apology and four staff were dismissed or suspended.

The firm, which has a global presence and major international clients, has lost some big accounts over the affair, including luxury goods company Richemont and the Investec investment company.

Almost two weeks ago, the UK's industry trade body, the Public Relations and Communications Association (PRCA), upheld the complaint from the Democratic Alliance.

The PRCA is due to meet on Monday to discuss possible sanctions on Bell Pottinger, including whether to end the firm's membership.

Expulsion would do further reputational damage, and could lead to more clients severing their relationship with the firm.

A separate report by an independent law firm, commissioned by Bell Pottinger, is due for publication imminently, perhaps as early as Monday.

Mr Henderson told the BBC on Sunday: "Whilst I had no involvement in the account, there were warning signs that I should have heeded. Therefore I must take responsibility."

He is a major shareholder in the firm, and said he would continue to be supportive of the business and do what he could to help it in the future.

A fuller statement from the company would be issued on Monday, he said.

Phumzile Van Damme, communications minister for the Democratic Alliance, said there was no honour in Mr Henderson's resignation.

"James Henderson's decision to relinquish his role as CEO of Bell Pottinger is not in any way an act of valour. He owns 40% of the public relations firm and remains a majority shareholder," she said.

The PR firm was hired by Oakbay, a company owned by the Gupta family, whose interests stretch from mining to media.

The Guptas have been accused of using their connections with South Africa's president, Jacob Zuma, to win contracts and influence political appointments. Mr Zuma and the Guptas strongly deny all allegations.

Last month, after publication of the PRCA ruling, Mr Henderson said the firm was "looking at all options for the company, including future ownership". There were reports it has received takeover interest.

Previous Article:4 things companies must do in a PR crisis