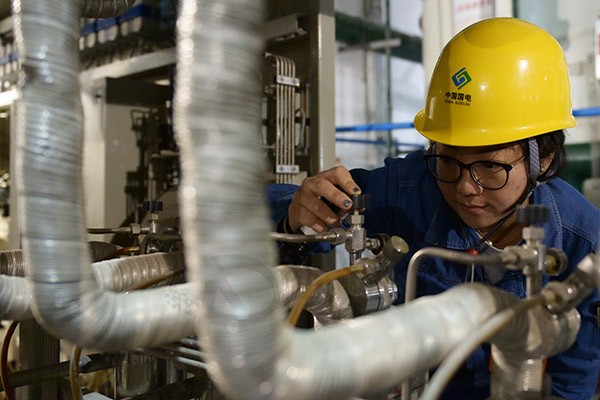 Link up to create world's largest utility provider by capacity

The merger will likely create an energy behemoth with combined assets estimated to be in the range of 1.73 trillion yuan ($254 billion) to more than 1.8 trillion yuan.

Analysts believe the integration of the two companies' strengths and resources will benefit both sides.

According to Wu Lixin, deputy director of the strategic planning research department at the China Coal Research Institute, the merger will enable Shenhua to improve its coal-dominated energy mix by advancing into clean energy segments.

State power producer China Guodian Corp, on the other hand, can also benefit from its coal partner by keeping away from issues related to supplies and prices, he said.

Zhou Dadi, a senior researcher at the China Energy Research Society, said the merger is part of the government's plan to deepen reform of SOEs, as the State-owned Assets Supervision and Administration Commission vowed to reduce the number of central SOEs to under 100 and make them healthier and leaner.

Shenhua saw its first-half profit more than double from the same period of 2016, due to the higher coal price, the company said on Monday. Its net profit increased 142.9 percent year-on-year to 26.298 billion yuan, while its revenue jumped 53.1 percent to 120.518 billion yuan. Earnings per share were 1.322 yuan.

Seeing the supply and demand in Chinese coal market stabilize in the second half, the company projects the coal price will remain at around 550 yuan per metric ton, with seasonal price changes in some regions.

"Stable economic development with good momentum will be beneficial to the stability and growth of demand for coal. Supply and demand in the national coal market will continue to be balanced, with demand for thermal coals remaining stable and growing. The demand for national electricity will maintain such growth momentum and the growth rate is estimated to be flat or a little improved as compared with that in 2016," Ling Wen, president of China Shenhua Energy Company Ltd, said at a news conference in Hong Kong on Monday.