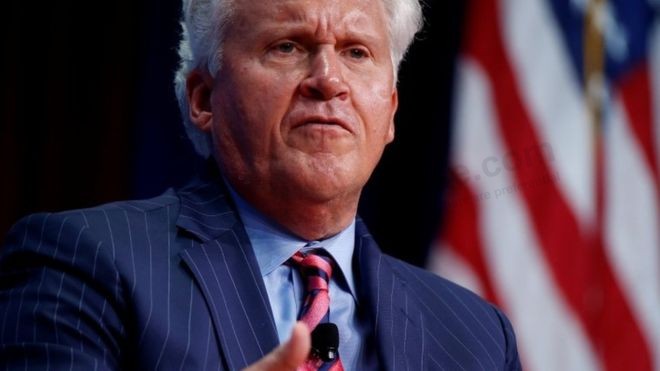 General Electric chair Jeff Immelt has ruled himself out of the race to become the new boss of taxi service Uber.

In a tweet, Mr Immelt said he had "decided not to pursue a leadership position at Uber".

Hewlett Packard Enterprise chief executive Meg Whitman is now reported to be "the most likely candidate".

Uber has been searching for a new chief executive since June after previous boss Travis Kalanick resigned following pressure from shareholders.

His resignation came after a chaotic few months at the firm and followed a review of practices there amid a series of scandals including complaints of sexual harassment, a macho culture and the departure of senior executives.Ms Whitman has previously said she is not interested in the job, posting on Twitter that "I am not going anywhere. Uber's CEO will not be Meg Whitman."

However, the New York Times said she was "emerging as the likely candidate" to be selected as Uber's new chief.

She is currently president and chief executive of Hewlett Packard Enterprise Company, having split its computer and printer business (HP Inc) from its corporate hardware and services operations in 2014.

Under her tenure she has dramatically shrunk the firm, arguing a smaller firm is better able to compete with new start-up rivals.

Uber's eight-member board is expected to vote later on Sunday on the firm's new leader.