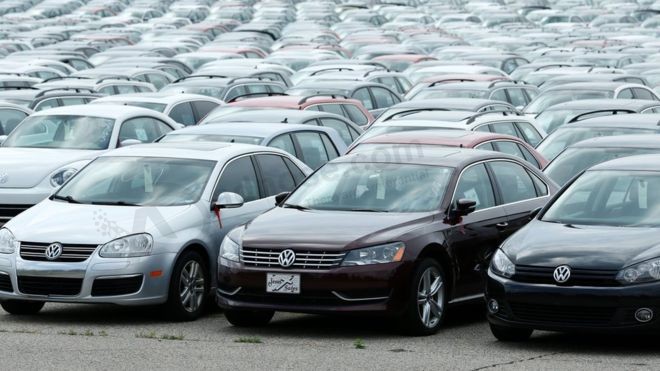 A former Volkswagen engineer who helped develop a device that enabled cars to evade US pollution rules has been sentenced to more than three years in prison and ordered to pay $200,000.

James Liang, 63, was the first person prosecuted in the emissions scandal.

The US investigation has led to charges against seven others in the US and sparked probes in other countries.

Volkswagen has admitted guilt, agreeing to spend as much as $25bn to address US claims.

Liang co-operated with prosecutors, who argued that his help with the investigation warranted a reduction in the possible punishment to three years in prison and a $20,000 fine.

But US District Court Judge Sean Cox opted for a harsher penalty of 40 months and a $200,000 penalty, saying he wanted to send a message to others in the car industry.

"This is a very serious and troubling crime against our economic system," he said.

Volkswagen has admitted that it used software installed in diesel vehicles to deceive environmental regulators in the US and Europe between 2006-15.

The German company sold about 11 million such vehicles globally, including almost 600,000 in the US.

The devices, which allowed vehicles to perform better in test conditions than they did on the road, came to light after a study of emissions by researchers at West Virginia University.

In a memo submitted to the court last week, prosecutors acknowledged that Liang did not "mastermind" the plan, but argued that he abdicated his responsibility to speak out.

They wrote: "Unless individual actors are also punished, future corporate employees and contractors may be tempted to justify their criminal behavior as just 'doing their jobs' or 'following orders'.

"Sentencing Liang to a three-year term of imprisonment will deter others from making similar rationalizations."

Liang's lawyer had urged the judge to consider a lighter penalty in recognition of his assistance with other cases.

Liang, who is still employed by Volkswagen but does not work as an engineer, can appeal.

Previous Article:Gold is doing better than U.S. stocks this year

Next Article:Ford to look beyond credit scores in sales push