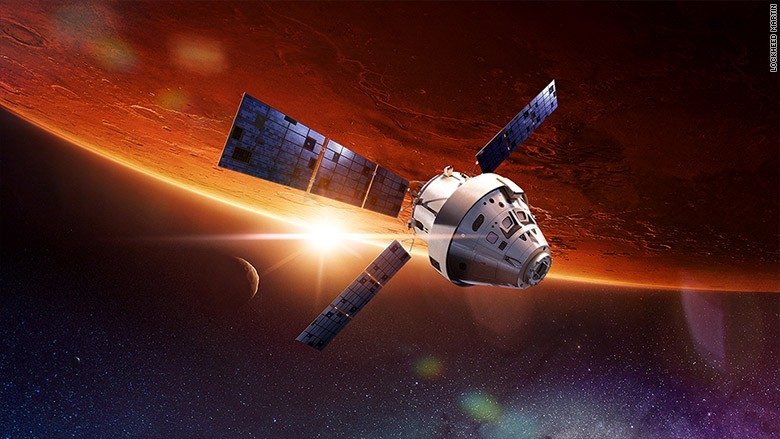 NASA just got one step closer to its most ambitious spacecraft ever: One that can carry humans to the moon, Mars and perhaps beyond.

It's called Orion. And Lockheed Martin (LMT), NASA's contractor for the project, said the latest version of the vessel was powered on for the first time Tuesday morning, lighting up the intricate on-board computers that will one day help guide Orion through the vacuum of space.

"This is the brains and heart of the spacecraft," said Lockheed spokesperson Gary Napier. He added that the inaugural power-up appeared to go "very well."

For the next one or two months NASA will add even more computer systems and continue testing its hardware and software, Napier told CNNMoney.

It's an important milestone for Orion, which NASA has been working on ever since the Space Shuttle program was retired in 2011.

The hope is to one day launch the spacecraft on the Space Launch System (SLS), a truly massive rocket that is also currently under development by NASA and a handful of private-sector contractors.

When it's up and running, SLS could be the most powerful rocket ever built. The current record holder is NASA's Saturn V rocket, which was used in NASA's Apollo missions, including the 1969 moon landing, and has long been retired.

Orion and SLS are seen as NASA's next great step forward.

Orion is tentatively scheduled to fly on SLS for an unmanned test flight around the moon in 2019.

"Although astronauts will not fly in this capsule on this flight, a large majority of the [tech is] the same design that astronauts will rely on during following missions with Orion into the solar system," Lockheed said in a statement.

It's not clear when the first humans will actually climb aboard Orion. NASA originally slated the first manned mission for sometime in 2021, but the timeline has since shifted and NASA has yet to set a new target date.

Critics say SLS and Orion have been too slow and expensive, particularly in light of the rapid development of the U.S.'s commercial space industry.

Elon Musk's SpaceX is known for its Mars ambitions, and the firm is expected to announce a major update to its Mars travel plan in the coming weeks. And Jeff Bezos, head of Blue Origin, is underway on his own spacecraft capable of making cargo trips to the moon.

Meanwhile, NASA has poured tens of billions of dollars into developing SLS and Orion, and it's already pushed back several deadlines.

But cheerleaders for NASA's Orion program say the private sector is far behind NASA in developing something that would have SLS and Orion's capabilities.

And, of course, NASA put the very first humans on the moon -- so the agency knows a thing or two about the perils and complications of spaceflight.

"Orion was designed from the beginning to take humanity farther into space than we've ever gone," Mike Hawes, the Orion program manager at Lockheed, said in a statement. "Everyone on the team understands how crucial this test campaign is, and more importantly, what this spacecraft and mission means to our country and future human space flight."

Next Article:China's 'big four' banks to raise billions for Belt and Road deals