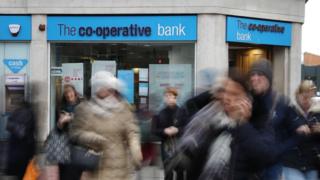 The Co-operative Group will be left with only a tiny stake in the Co-op Bank after shareholders approved a £700m rescue package on Monday.

The bank will be largely owned by five US hedge funds in a deal that saves the lender from being wound up.

Campaigners said they hoped the bank would retain its ethical stance despite losing the Co-op as a major backer.

The Co-op Group's stake will be cut from 20% to 1%, having already sold off a major chunk four years ago.

The bank, which has four million customers, almost collapsed in 2013, and was bailed out by US hedge funds.

At the start of this year it put itself up for sale but abandoned the process in June.

Instead the bank announced that its existing hedge fund owners would take a bigger stake in the business.

The consortium of US hedge funds agreed to write off £440m of debts and inject £250m in new funds.

Shaun Fensom from the campaign group Save Our Bank said he was "hopeful the bank's special ethical stance will stay".

"There's every indication that the hedge funds - who are only going to be there for a while - understand that the commercial survival of the bank very much relies not only on talking the talk on ethics, but walking the walk as well," he told BBC Radio 5 live.

Mr Fensom said the bank arguably would not "stand a chance" if it lost its reputation for ethical business.

"But the incredible loyalty from its customers has shown that doing the right thing on ethics is commercially sound," he added.

The Co-operative Bank was originally set up to provide services to the co-operative movement.

The bank says it is still based on "co-operative values" and supports the UK's co-operative sector. It's ethical policy also means it doesn't provide banking services to some types of organisation such as payday loan and fossil fuel companies.

The rescue package - which was backed by 90% of shareholders on Monday - is expected to go through by the start of September.

Next Article:Angela Merkel: Germany could ban gas and diesel cars