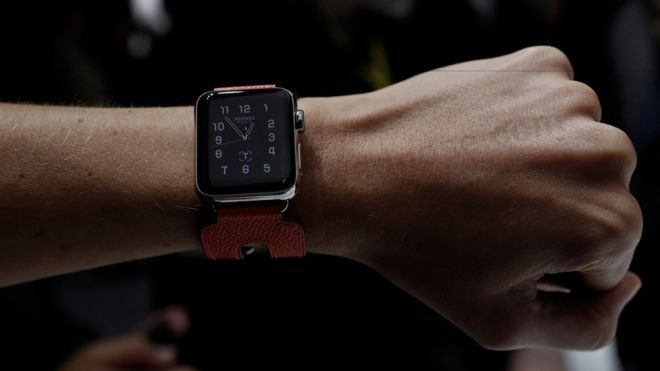 Bloomberg reports that the new Watch will connect directly to LTE mobile networks.

The company has begun talks with providers in the US and Europe about offering the device later this year, the report says.

Apple launched the Watch in 2015 but is yet to share any sales figures.

In a recent call to investors, Apple boss Tim Cook said his firm's watch was the best-selling smartwatch in the world.

But in the wider wearables market, Apple lags behind Chinese firm Xiaomi and San Francisco-based Fitbit, according to Strategy Analytics.

While originally positioned as a luxury device, Apple has more recently focused on the fitness credentials of the Watch.

Untethering it from the iPhone would open up a range of new functionality - such as allowing users to download songs on the move, even if they do not have their smartphone with them.

"Apple clearly has big plans for Watch both in the health segment and as a gateway to the connected home,” said Carolina Milanesi, consumer tech analyst at Creative Strategies.

However, there will be concern about the battery life of the device. Most of the computational heavy-lifting on the current Apple Watch is done via the paired iPhone.

According to Bloomberg’s report, the new device’s modem will be manufactured by Intel.

The device would come on to the market several years after Apple rivals Samsung and LG launched their own cellular-enabled smart watches. However such devices have tended to be too large to gain any kind of mainstream popularity.

Apple did not respond to the BBC’s request for comment on Friday.

Next Article:At the heart of bike-sharing