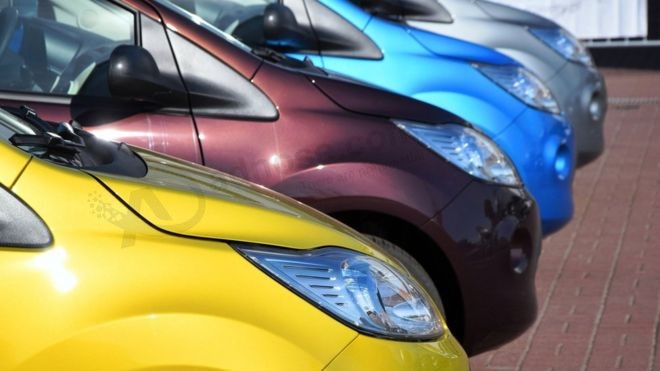 UK car production fell by 13.7% in June compared to a year earlier - the third month in a row that output has fallen.

The Society of Motor Manufacturers and Traders (SMMT) said the UK market was cooling in line with forecasts, following a long period of record growth.

The industry is likely to fall short of its ambition to produce more than two million cars a year by 2020, it said.

The SMMT said uncertainty over Brexit was an added cause for concern.

But a spokesperson for the Department for Exiting the European Union said the government was determined that the UK would continue to be "one of the most competitive locations in the world" for automotive manufacturing.

The fall in production mirrored a decline in UK car sales.

Over the first six months of this year, sales were distorted by a rise in Vehicle Excise Duty in April, which prompted drivers to bring forward purchases of new cars.

But comparing the first six months of 2017 with the equivalent period in 2016 still showed a fall of 9.5% in UK sales, the SMMT said.

Overseas demand for British-built cars has remained broadly steady in the first half of this year, falling only by 0.9% compared to the same period last year.

As a result, total output for the year is 2.9% lower than a year ago.

Independent forecasters are predicting output will pick up in the second half of the year, thanks to new and updated models coming into production.

However the SMMT warns that output could fall in 2019, if the UK fails to secure a deal with the EU, or at least an interim agreement, that maintains current trading conditions after Brexit.

The SMMT suggested a "hard" Brexit, with the UK leaving the EU single market and customs union, could result in a 10% hit to production.

"The government has been in 'listening' mode but now it must put on the table the concrete plans that will assure the future competitiveness of the sector,"

The Department for Exiting the European Union spokesperson said: "The government's industrial strategy makes clear that we want to build on our strengths in advanced manufacturing in this sector.

"Nissan's decision to continue its investment in Sunderland and plans by Jaguar Land Rover to double its output here are clear votes of confidence in our automotive industry.

Earlier this week, BMW announced it would manufacture the new electric version of the Mini at its site in Cowley, Oxfordshire - a move welcomed by Business Secretary Greg Clark as a "vote of confidence" in the UK.

However, that investment builds on existing production of the standard Mini, already taking place at Cowley.

Analysts said the real test of confidence would come when carmakers decided where to build new models.

Previous Article:Coca-Cola is replacing Coke Zero with a new drink