According to US media, Thailand has created a new channel for food export to China during the epidemic.

Most agricultural and food products are traditionally trucked to China from Farms and warehouses in Thailand via Vietnam or Laos, the report said. Sea and air transport are also used now. But the COVID-19 outbreak has disrupted global logistics, causing delays in customs clearance, fewer flights and difficulties in handling goods that are not seaworthy.

One solution was launched this month when Thailand launched a dual-mode system to transport products to Vietnam by truck and goods to China by container train. It may sound simple, but it is the first time such shipments have been made in Thailand, according to Nalaba Kajutong, deputy minister of agriculture.

"It is now cheaper and faster to transport goods by rail than by truck, so we have greatly reduced the overall cost and delivery time," Naraba said in an interview from Bangkok. This could become one of our new transportation systems. We can build on this idea and export more at a lower cost."

There is currently no direct rail link between Thailand and China, but plans to link the two countries by rail are in the works, the report said.

Statistics show That China is Thailand's second largest export market after the United States. About 80 per cent of Thailand's agricultural products are traditionally shipped overland to China. Tropical fruits, such as durian, mangosteen and longan, are the main exports and the least likely to be preserved.

Thailand's exports to China were reported to have risen 15.3 per cent year on year in May, while total exports fell 22.5 per cent. Thailand's economy, which relies on trade and tourism, is facing its worst contraction in more than two decades, with the central bank forecasting a record 8.1 per cent contraction in gross domestic product. 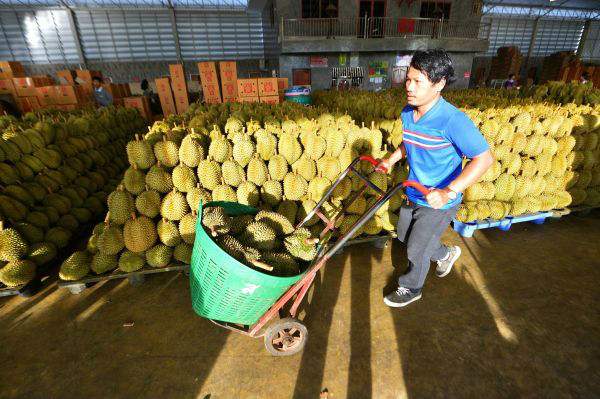