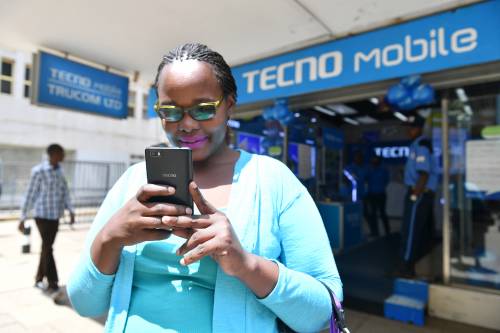 According to German media, 77 percent of africans under the age of 35 now use smartphones. Africa's smartphone market is highly competitive and there are few brands that can meet the needs of African customers, but some Chinese brands have emerged as the best, the report said.

"I can't imagine life without a smartphone," said barde, who was searching for work on the streets of guinea-bissau's capital. The 35-year-old father sometimes changes money for foreign businessmen and sometimes runs errands for shop owners. "With my smartphone, I can keep in touch not only with customers, but also with friends and acquaintances around the world," he said. Smartphones are almost as important to me now as electricity, water or bread."

'smartphones should do the same thing,' Mr. Barder says. He himself recently bought a chinese-branded smartphone: "it's cheap and has all the features we need in Africa. The phone has been equipped with access to important social media servers. In addition, the phone itself is durable, and the battery will last several days in standby mode. So I'm very grateful to the Chinese for making it so easy for us to use the Internet!"

Not only in guinea-bissau, but also in Senegal, Nigeria and Ethiopia, Chinese phones dominate the local market, the report said.

Industry insiders said price is the most powerful weapon for some Chinese brands, the report said. Chinese brands have also made improvements after carefully analyzing the needs of African users.