China and Pakistan are good neighbors, good friends and good partners. A few days ago, we learned from the china-pakistan seminar on trade and investment opportunities that, against the backdrop of greater downward pressure on the global economy, china-pakistan relations have been further consolidated. Pakistan supports the "One Belt And One Road" initiative. The seminar is sponsored by ccpit and the embassy of the islamic republic of Pakistan. Pakistani prime minister imran khan delivered a keynote speech, and gao yan, President of the China Council for the Promotion of International Trade, delivered a welcoming speech. More than 200 representatives from the political and business communities of China and Pakistan attended the seminar.

Khan said that Pakistan has obvious geographical advantages, more than 60 percent of the population is under 30 years old, and has abundant labor resources. Pakistan is carrying out economic reforms to better unleash its economic development potential. It needs to learn from and learn from China in many areas.

Regarding bilateral economic and trade cooperation, imran khan said that the Pakistani government is now strongly supporting Chinese enterprises in agriculture, food processing, manufacturing, information technology, financial services and other industries to invest in Pakistan. Pakistan will take a series of measures to remove investment barriers and make it easier for Chinese enterprises to invest in Pakistan.

Gao yan said in her speech that in recent years, with the joint efforts of both sides, the political mutual trust between the two countries has become more solid and the cooperation in various fields centering on the joint construction of the One Belt And One Road has made great progress. The china-pakistan economic corridor has yielded fruitful results, the gwadar port has been revitalized, and the cooperation in energy, finance and trade has been fruitful, bringing tangible benefits to the two countries and peoples.

Gao Yan said that as China's largest trade and investment promotion agencies, the business community is willing to work with Pakistan, ccpit as industrial park, agricultural and social livelihood of the people, and for the new key, expand and enrich china-brazil economic corridor construction, seize the free trade agreement between China and Pakistan upgrade opportunity, vigorously develop the bilateral trade, promoting the development of bilateral economic and trade cooperation with high quality. 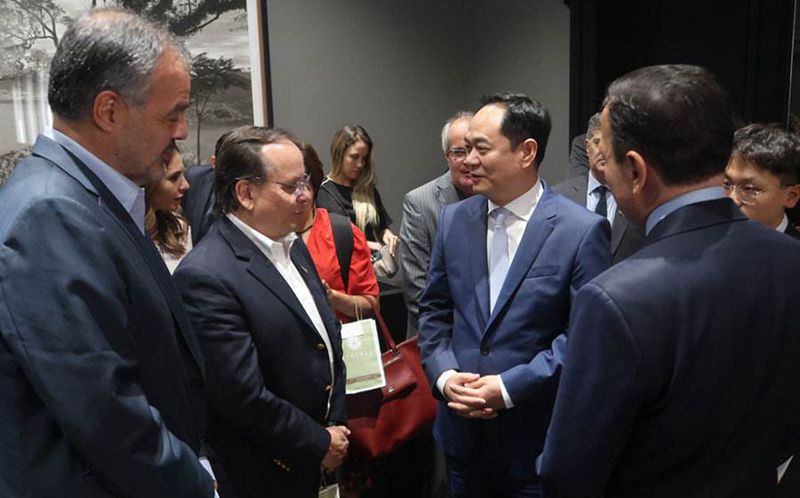 Fang yanshui, vice President of China machinery engineering co., said the company has invested more than $200 million in Pakistan and will continue to invest more in the future. At present, the company has started planning a series of priority agricultural cooperation projects.

Zhang ye, vice President of China metallurgical industry group co., LTD., said that since the 1990s, the company has been actively involved in Pakistan's economic construction and resource development, adhering to the development concept of "win-win cooperation for the benefit of the local community", actively fulfilling social responsibilities, and always adhering to the principle of paying equal attention to economic benefits and social benefits. With the strong support of the Chinese and Pakistani governments, the company operates mineral projects that are highly praised by the local people and will continue to strengthen cooperation with Pakistan in infrastructure, urban construction, iron and steel metallurgy and mining development.