The Danish Chinese chamber of commerce celebrated its first anniversary in Copenhagen Tuesday. The political and economic circles of China and Denmark who attended the event said that there is great potential for china-denmark economic and trade cooperation. Both countries support upholding multilateralism and opposing trade protectionism.

In his speech, Chinese ambassador to Denmark feng tie said that despite its short history, the Chinese chamber of commerce in Denmark has made significant contributions to promoting china-denmark economic and trade cooperation, provided good services to Chinese enterprises in Denmark and acted as a bridge connecting the business communities of the two countries. The chamber of commerce also actively fulfill social responsibilities to build a good image of Chinese enterprises.

Raoul David findeisen, said the new Chinese ambassador to Denmark in the three months, he met with almost all in Dan, head of the Chinese enterprises, and met with Danish politicians and industry association, association of Danish shipping, maersk, Denmark grundfos and other institutions and enterprises, to the enthusiasm of the people from all walks of life to develop relations with China are encouraged.

"What I have seen and heard fully shows that the development of china-denmark relations in the past 70 years has a solid foundation." Feng said that the two countries share broad common interests in supporting free trade and multilateralism and opposing protectionism, and have the same voice in tackling climate change. "There is broad space for the two countries to expand cooperation and china-denmark relations have a bright future."

"I look forward to continued close cooperation between Denmark and China for many years to come." Simon Kollerup, minister of business and financial affairs of Denmark, congratulated the Chinese chamber of commerce of Denmark on its first anniversary. He said that China is one of the largest export markets of Denmark, and more than 500 Danish companies are doing business in China. At the same time, Chinese companies operating in Denmark have created local jobs and tax revenue, contributing to Denmark's growth and prosperity. 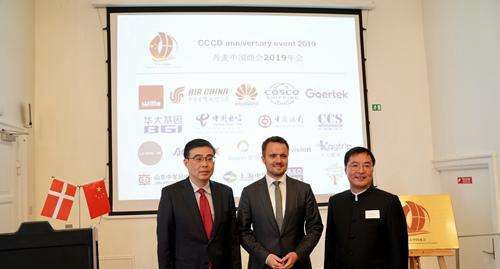 With the rising living standards of Chinese people, Denmark can not only provide the Chinese market with high-quality, healthy food and environmentally friendly technologies, but also serve as the best investment destination for Chinese companies, said Simon collerup.

Hans Andersen, a member of the Danish parliament, said that maintaining good bilateral relations is of great significance to both Denmark and China and the two countries should continue to strengthen cultural, technological, economic, trade and investment cooperation.

Wang weiqing, President of the Chinese chamber of commerce in Denmark, said that although the chamber was founded only a year ago, its member companies have created nearly 2,000 jobs in Denmark and will continue to contribute to the local economic and social development.

During the ceremony, the second China international import expo was held.