Recently, Nestina's pet nutrition brand Purina has built a series of billboards on the streets of France to encourage your dog to pee on it!

This idea has a good taste and is worthy of being an open Frenchman...

In fact, this is a billboard device that can do a urine test for the dog. After the urine is finished, the screen will display the test result. Because many people in France do not have the habit of taking a dog to do a health check, this fast urine test billboard not only reminds the French to pay attention to the dog's health, but also recommends the appropriate Purina nutritious food according to the dog's health.

Due to the advancement of technology and the endless stream of ideas, in fact, billboards are not just a kanban full of slogans, there are more and more technical support for creative people to implement ideas on the streets. Here are some of the more fun interactive billboard cases for you. There is nothing to stop the evolution of billboards!

Chocolate Kit Kat: Are you tired of commuting to work? Massage it!

Because chocolate is a very stressful snack, Nestlé's chocolate brand Kit Kat thinks of using another method of stress--massage to promote. In Colombia, people can enjoy back massage by simply relying on billboards. Online, you can also find out where there are billboards for massage.

Grab: It’s raining! Looking for billboards to get raincoats

In a crowded city, rain can cause traffic jams, because the riders who are not equipped with rain are all crowded in small places where they can hide from the rain. Everyone can't move. Therefore, Grab, a Singapore taxi service provider, has made a number of raincoats disguised as billboards, allowing people without umbrellas to move freely and change their walking billboards.

Mitsubishi Air Conditioning: Helping you to warm your hands in the streets of Northland

Air conditioning is something that only hates less when it is particularly hot or particularly cold. In Norway, which is cold all year round, Mitsubishi Air Conditioning has turned billboards into small stoves, which are particularly warm.

Samsung: The washing machine is in the subway station, helping you to "net" the hometown

We Chinese people must go home for the New Year, so Samsung put a real washing machine in the subway station during the New Year, so that you can return home. Just don't know where to wash the clothes?

Pharmacy: Billboards are coughing all the time, you still have to smoke less!

Walking on the street with a cigarette, I suddenly heard someone coughing, but no one beside you! Is it a bit awkward and a bit hairy?

The idea from Sweden is to put the smoke sensor on the billboard. When the smoke is sensed, the people in the billboard will start to cough. I hope everyone smokes less. It is said that this superb idea has to be rejected, but Party B patted his chest and said that it is really amazing for them to bear all the losses.

Billboards also yawn? Isn't it a lack of coffee?

The Brazilian coffee brand Café Pelé puts such an interactive billboard in the busiest subway station during the morning rush hour: as soon as someone approaches, the billboard will start yawning. The more people passed, the higher the frequency of yawning, and everyone was infected, and they all began to yawn.

The screen will show you: You need a cup of coffee... Then, the girl with the coffee appears! This is too wit!

Carlsberg: Known as the "best billboard", it is actually beer for you to drink.

Carlsberg beer has done “probably the best billboard” in the UK, but there is no such thing as a slogan on the brand, but there are a bunch of people lined up under the sign...

It turned out to be a free beer! You guys!

Sprite: Is it a shower with a sprite? Cool and cool!

Sprite is really going to do things. I used to have an oversized drink bucket on the beach in Brazil. It’s like taking a shower with Sprite when it’s cool, so don’t feel too cool! 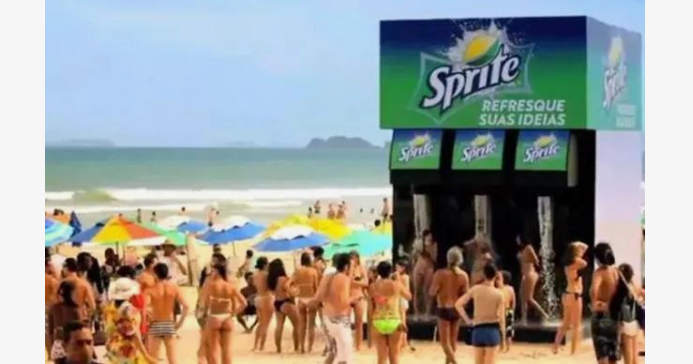